A Lesson in Relatability from Kirk Cousins 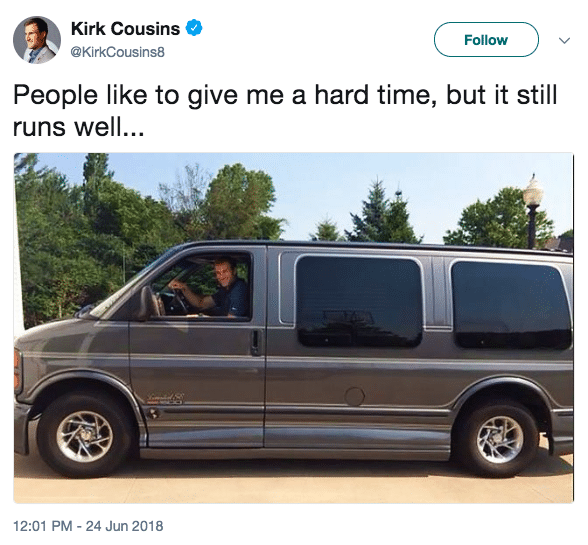 What does this tweet from freshly traded Minnesota Vikings quarterback Kirk Cousins have to do with playing in the NFL? What about it builds his brand as a talented athlete and tactician on the field? Nothing! But it does build his brand as a likeable public figure. Fans can relate!

Kirk Cousins uses his social platforms to build a following online and offline. His jersey is a top seller in the NFL Shop. In March, he signed a fully guaranteed three-year deal with the Minnesota Vikings worth $84 million. But he’s not posting pics of himself Scrooge McDucking it in piles of cash or cruising in a pimped out ride. For his own reasons of frugal practicality, he’s still driving a used 2000 GMC van that he bought from his grandma, and he’s sharing that on social media to show that he’s just a regular guy and that he hasn’t let fame and fortune go to his head.

His tweet has over 17,000 Likes and over 1,700 retweets. Some vulnerability bought him some serious visibility. Given the distance and even fear that many patients have surrounding dentists, if more of our offices used social media to be more human and more relatable, we would likely see more engagement on social and more conversions from our other marketing efforts. For more ideas for relatable social media posts, see our Stay Social calendar.